When the Flow Frame is operated, the hexagonal honeycomb cells split forming vertical, zig-zag channels which the honey flows down and into the honey trough at the base of the frame.

The honey trough at the base of the Flow Frame is comparatively large and we have never had anything cause a blockage here. It is also very accessible and can be cleaned  from outside the hive using a bottle brush or something similar.

Click here for information on how to clean Flow Frames.

Sometimes, a small build of honey or nectar can appear in the honey trough before harvesting – this is often caused by bees filling cells before finishing closing the gaps between the cells. The build-up is caused by the leak back point being clogged (which the bees may do naturally in an attempt to seal any gaps). You can easily free the leak back point using the tongue of the Flow tube, a small stick or kitchen skewer.

Although you should not need to smoke the hive when 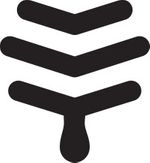 This website is operated by BeeInventive Pty Ltd ACN 161 952 941, licencee of the Flow® brand, and Flow® technology including Flow Hives and Flow Frames.